Welcome to our research page! In general, our research group aims to discover, develop and understand new transition metal-catalyzed reactions. The scope of our studies encompasses the functionalization of C–H bonds in substrates ranging from alkanes to complex natural products and polymers, the enantioselective formation of C–C, C–N and C–O bonds by additions to alkenes and allylic substitution, and the creation of artificial metalloenzymes for applications in organic synthesis. The discovery of fundamentally new transition metal chemistry and its development into practical, catalytic synthetic methods is a theme of our research. We reach these goals by obtaining insight from detailed mechanistic studies, developing new concepts in catalysis, and merging principles of biocatalysis and chemical catalysis. The following classes of metal-catalyzed reactions are currently being investigated in our group:

Our group has discovered some of the most widely practiced C–H bond functionalization reactions. We discovered the reactions of metal boryl compounds with arenes and alkanes to form functionalized products and developed this new elementary reaction into catalytic processes for the conversion of alkyl and aryl C–H bonds into C–B bonds. The C–B bonds in the product can then be converted to C–C and C–heteroatom bonds in a wide range of valuable products. We have recently extended this type of catalysis to the formation of C–Si bonds from silane reagents as well. We are now seeking to apply this chemistry to the functionalization complex arenes and heteroarenes and to the discovery of catalysts that functionalize aliphatic C–H bonds in molecules with complex structures and with a range of auxiliary functionality. Recently, we showed that such a goal can be reached by our discovery of the functionalization of primary C–H bonds with the substrate as the limiting reagent with an iridium catalyst ligated by 2-methylphenanthroline.

This work on alkene hydrofunctionalization rests upon our discoveries of new elementary reactions of organometallic complexes. We reported the oxidative addition of ammonia to form monomeric products with late transition metal complexes and the insertions of ethylene and α-olefins into transition metal–amido and transition metal–alkoxo bonds.

See our publications on hydrofunctionalization of olefins.

We have developed an iridium catalyst that forms chiral allylic amines, ethers, and carbonyl compounds in high enantiomeric excess from terminal allylic esters. Detailed mechanistic studies have shown that the catalyst forms by cyclometalation at a methyl C–H bond of the ligand, and this observation has allowed the design of simplified, as well as improved catalysts. The scope of the reaction encompasses a wide range of nucleophiles. Current studies are focused on expanding the scope of allylic electrophiles and on approaches to control the diastereoselectivity of reactions that form C–C bonds from enolates. These current efforts led to enantioselective activation of a C–F bond to form chiral products with fluorine at the stereocenter, as well as methods to form products containing multiple stereocenters, including those containing fluorine.

We developed a palladium-catalyzed process that forms arylamines, aryl sulfides, and arylethers. This reaction has become one of the most widely practiced reactions by medicinal chemists discovered in the past four decades. The catalytic chemistry resulted from our detailed mechanistic experiments on transition metal amide, alkoxo and thiolato complexes. One catalyst we developed leads to the formation of arylamines and aryl sulfides with turnover numbers exceeding 10,000 in many cases and ppm levels of palladium in others. This catalyst also coupled aryl halides with ammonia for the first time to form primary arylamines without any protecting or blocking groups and coupled unprotected hydrazine with ppm levels of catalyst. Another class of catalyst we developed recently contains nickel in place of palladium. This catalyst is the first nickel-based catalyst to couple primary amines with a range of aryl halides. Yet another system based on palladium catalyzes the first thermal coupling of alkyl halides, instead of aryl halides, with a nitrogen nucleophile to form alkyl-nitrogen bonds. These reactions occur preferentially with secondary and tertiary alkyl halides that undergo elimination, rather than substitution, in the absence of the catalyst. Finally, we have conducted a series of studies on the mechanism of copper- catalyzed coupling reactions and generated definitive evidence for pathways involving Cu(I) and Cu(III) without active Cu(II). These efforts have recently included a class of catalyst that reacts with the highest turnovers known of several classes of copper-catalyzed couplings.

This coupling reaction is useful for total synthesis, medicinal chemistry, and the preparation of electronically important organic materials. FDA-approved drugs have been manufactured using this chemistry, and countless drug candidates have been prepared by these reactions. At the same time, the catalysis involves unprecedented reactions of transition metal compounds, principally reductive elimination to form carbon-heteroatom bonds. Thus, some students focus on novel inorganic chemistry while others use this reaction as a modular route to nitrogen heterocycles and polyanilines.

We have developed a simple method to convert aryl halides and ketones, esters, amides, cyanoesters, malonates, nitriles, and related compounds to alpha aryl carbonyl compounds and nitriles in the presence of base and a palladium catalyst. Familiar compounds that can be generated from these products include Ibuprofen, Naproxin and Tamoxifen. The reaction occurs in a general fashion and in many cases with low catalyst loadings. As noted in the next section, recent studies have focused on the coupling of enolates containing fluorine on the α-carbon, including enantioselective versions of these reactions.

As part of our studies to understand this process, we have generated both O-bound and C-bound palladium enolate complexes. These complexes undergo reductive elimination of the α-aryl ketone, ester, or amide product in good yields. Recent mechanistic studies focus on understanding the effect of fluorine on the underlying organometallic chemistry of these enolate complexes.


The synthesis of arenes and heteroarenes containing fluorine is crucial to the discovery of modern drugs and agrochemicals. These fluorine atoms impart a unique combination of steric and electronic properties and can influence the interactions of the molecules with proteins by non-covalent interactions. The fluorine atoms also modulate the metabolism of such compounds. Thus, we have sought catalytic methods for the conversion of arenes, heteroarenes, aryl halides and heteroaryl halides to products containing fluorine and fluoroalkyl groups.

These studies have lead to a series of practical methods to prepare aryl and heteroaryl fluorides, as well as arenes containing trifluoromethyl groups and difluorocarbonyl units. Representative methods include the coupling of aryl iodides and heteroaryl bromides and iodides with a copper reagent we developed, the fluorination of pyridine and diazine heterocycles at the C–H bond alpha to nitrogen, and the palladium-catalyzed coupling of aryl halides with difluoromethyl ketones and amides.

These reactions raise a series of questions about fundamental organometallic chemistry. Metal fluorides are difficult to prepare yet often unreactive. Alkyl groups containing fluorine on the α-carbon are typically unreactive toward reductive elimination and migratory insertion. Thus, the development of this catalytic chemistry confronts the challenge of inducing reactivity from metal fluorides and metal-fluoroalkyl complexes, and raises mechanistic questions about the identity of the intermediates and individual steps of the catalytic reactions we developed. To address these questions, we have prepared copper and palladium fluoride and fluoroalkyl complexes and are studying their fundamental reactivity.

See our publications on metal-catalyzed fluorination and fluoroalkylation.


The world manufactures approximately 300 billion pounds of polyolefins a year, and little of this plastic is recycled. We envision a future in which such plastic is chemically converted to more valuable products, converted to polymers with a more cyclic lifetime, and even created from the outset to have a cyclic lifetime by design. We have conducted studies to both create polymers from biomass sources that can be chemically recycled to monomer and to convert polyethylene in its various forms to functionalized polymers with new properties that add value, increase the incentive for recycling, and facilitate recycling. In particular, we have created siloxane polymers from biomass that undergo programmed cleavage to form monomers that can be repolymerized and that are biodegradable if they escape recycling. As shown below, we have converted fatty acids from non-food sources to polymers linked by silicon, and we have created more robust versions of these materials in work that will soon be published.

A second major focus of our work on chemical recycling is the functionalization and depolymerization of polyolefins. We have recently shown that catalysts for the oxidation of C–H bonds chosen for their ability to oxidize these bonds in a non-polar environment at high temperatures without persistent alkyl radicals leads to the smooth incorporation of hydroxyl and ketone groups along the main chain of the polymers. Among the many properties and applications that can be envisioned for these materials, the modified polymers adhere strongly to metal surfaces and can be painted with commercial latex paint. Multiple avenues are currently being pursued to develop further functionalizations, to make the oxidations even more efficient, and to explore the applications of the hydroxyl and ketone groups in these materials. 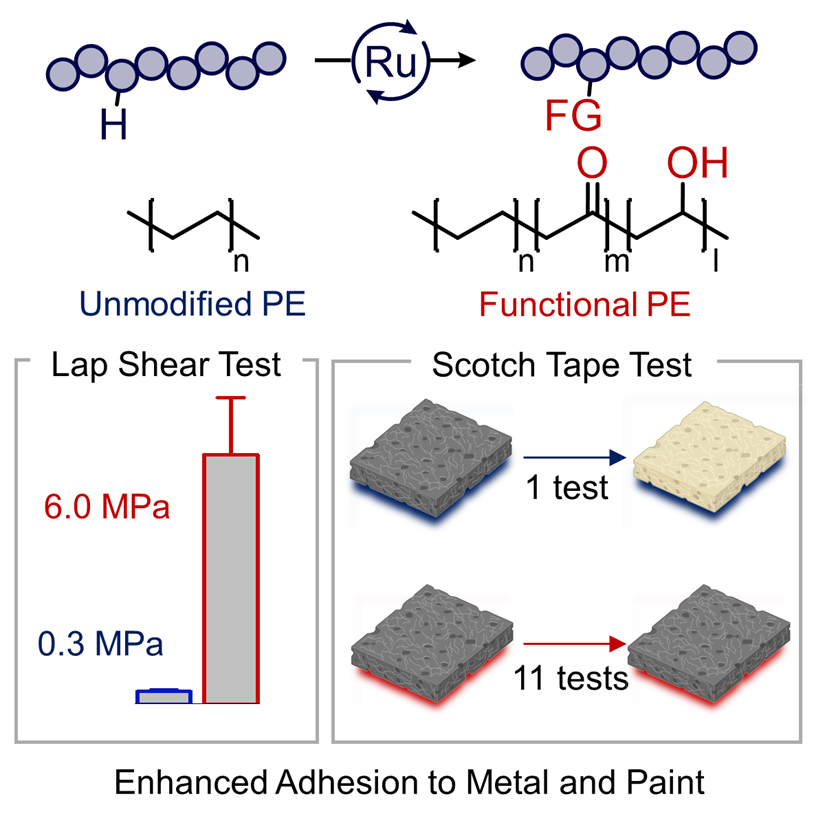 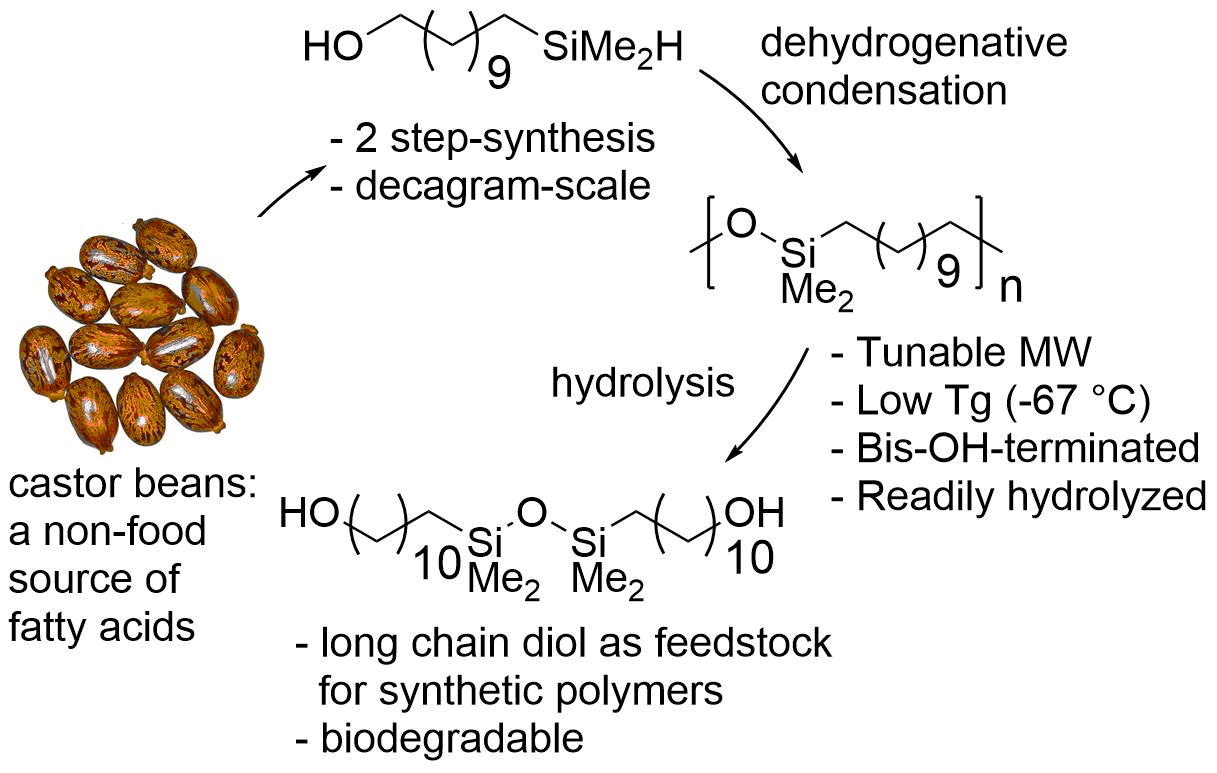 See our publications on catalysis for renewable chemicals and fuels.


In addition to studies with small-molecule catalysts, we have begun to develop methods to combine the diversity of reactions of organometallic complexes with the selectivity of enzymes. To do so, we have followed several approaches. In one case, we have developed cooperative chemoenzymatic reactions in which a chemical organometallic catalyst and an enzyme operate together to form one product with higher yield and selectivity than would be achieved by two using the two catalysts in two separate reactions. In a second case, we have created artificial metalloenzymes in which the active site of the enzyme is an organometallic complex. Most recently, this research avenue has led to our demonstration of a reaction catalyzed by carbonic anhydrase to reduce ketones in which the catalytic cycle includes the first enzymatic, mononuclear metal hydride (in this case a zinc hydride).

In a second set of studies on artificial metalloenzymes, we have replaced the iron in heme proteins with noble metals. Our currently most active system is generated by replacing iron with an iridium-methyl unit. By doing so in a P450 enzyme, we have created an artificial metalloenzyme that catalyzes the insertion of carbenes into C–H bonds with activities and selectivities that rival those of natural enzymes in biosynthetic pathways. Our first studies on this topic were published in Nature and Science and signaled a new approach to create organometallic catalysts with selectivity derived from a protein matrix that can be modified in a high-throughput fashion by laboratory evolution. Recent studies have revealed the ability to conduct regioselective functionalizations of C–H bonds and have shown crucial mechanistic features by a combination of X-ray diffraction and kinetic studies. 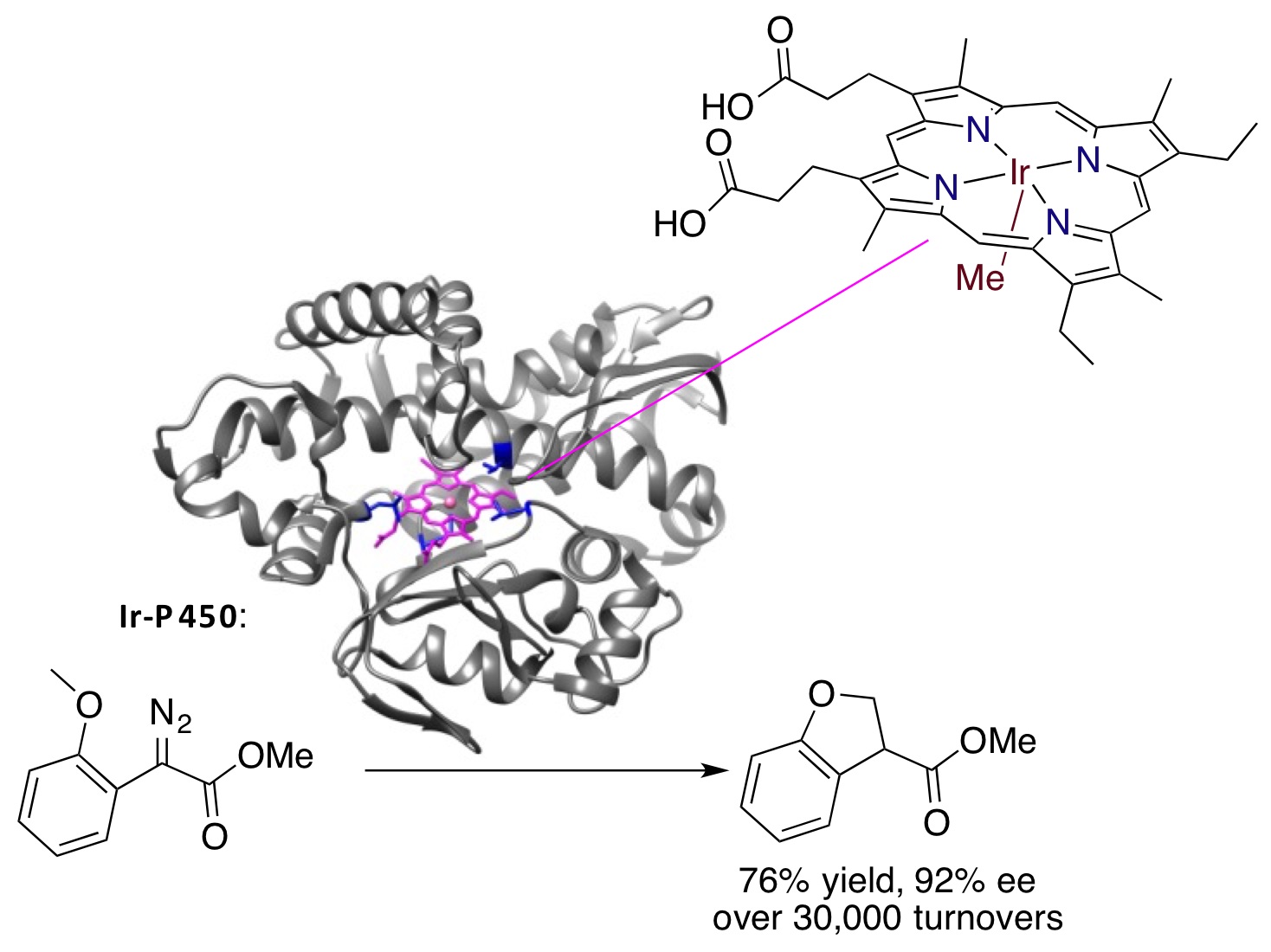 See our publications on artificial metalloenzymes.


We have been developing alternative approaches to the conventional methods for catalyst discovery and development. In particular, we have used fluorescent and colorimetric assays to evaluate catalysts for carbon-carbon and carbon-nitrogen bond forming processes catalyzed by transition metal complexes. With this approach, we discovered the catalysts for hydroamination of substrates with C=C bonds discussed above and for several types of room temperature cross-coupling reactions. Recently, we have followed an approach to discover new reactions by adding catalysts to mixture of reagents and analyzing for new products by mass spectrometry. In current studies, we are developing an informatics approach to deciphering the products formed from these systems. In addition, we are using these studies as an inspiration for creating large data sets, as well as approaches to use these data sets to predict catalyst activity or selectivity by machine learning.

See our publications on high-throughput screening.